Twelve thousand, three hundred and fifty two. That’s how many apologies I have to make, for the first time in my life I completed a game with the best possible ranking and it’s a terrible thing you see, I achieved, The S rank, a ranking so good that it (spoilers in coming) has led to a vaccine being developed, which in turn has led the world being save the end  of the outbreaks across the world. Cue wild celebration and mass hysteria from  from everyone in the world, it must be great knowing you are not going to be eaten or become a zombie and eat your friends. Eating your friends your would be horrible and i’d bet they would taste horrible too-even to a zombie, at least mine would. So everybody is happy. Everybody except for Nick Ramos that is. Nick whose avatar, the player takes over for this journey into the Apocalypse has killed a lot of ”people” sure a lot died because they were trying to kill him, a lot more because they were in the way but, a lot more and probably the vast majority died simply because ”Nick ”wanted to see what a gun would do, how good the sword is, or just how many Zombies I could blow up with fireworks and now people want answers, they want to know how i killed there loved ones. At least I didn’t use the Vibrator Gun that would of been really awkward.

Dead Rising is a game about mindless killing and one I completely lost my mind too, for a couple of days I really was Nick Ramos Zombie Survivor and all round fixer of everything imaginable in the world. It was really enjoyable to run around the Zombiefied world of Los Perdidos, killing everything that got in my way with all manner of weapons. Weapons that were everywhere, for on hearing their world was facing a fight to the death against an army of the dead the former citizens of Los Perdidos really went to town bringing with them an army of weapons including but not limited to: Assault rifles, Knifes, Axes, brooms, shopping trolleys, balls, bins, swords, katanas and basically anything else they could find  sadly this arsenal of Zombie of murder wasnt enough to save them and as they fell their weapons fell with them which leaves Nick and a small band of fellow survivors that you will stumble across along your way an almost unlimited supply of weapons at your disposal to chop, burn, shoot or electrocute your Zombie foe. Its great fun. I just wish some other parts of the game could be better.

For instance, not all of the citizens of Los Perdidos are running for their lives some of them, on seeing there fellow citizens killed by the hungry horde of the Undead have been driven quite mad and have become want the game is calling ”psychos”  and anyone else will call a nuisance as to get a good ranking you have to defeat them and this entails some really annoying boss fights against a biker, a crazed murdered drugging his victims and selling their body parts to anyone who wants to buy them and other general annoyances that I won’t spoil here except so say when ever I heard the term Physco across the game radio, the game radio being controlled by an NPC locked in safety directing you to some of the more of the map objectives, I didn’t look forward to my trek across the map as though they did offer a nice change of pace, most didn’t really have any sense of personality and led to a boring fight against a tedious character.  This is the same with many of the characters you save as well. They mean well as they will usually call you to save them from the Zombie menace or use to return a stolen briefcase and a few will even join your team, allowing you to arm a small group to go hunting with you as long as you keep them armed and alive or allow you to drop them off at a safe base and pick one up as you need but, again I found the characters so dull and unimaginative to interact with I happily left them at home and continued saving the planet on my own.

The main story is a bit better however and with a timer ever ticking down I felt a real sense of urgency to get the job done. The main quest also added a more rounded casts of would be heroes all much more able to look after themselves and where outside of a few cut scenes you didn’t really get to see them in action, it felt good to be with them as it felt as if they, eventually were all there for each other. The main plot is about as B movie as they and come and again I won’t spoil anything. I will sat however that it does lend itself to one to many fetch quests. Playing the main story does grant you access to a lot of blueprints and blueprints are why any one really plays Dead Rising as blueprints leads to Nick being able to make new and even better killing machines as he can turn any two ordinary weapons into something much deadlier for a few examples we have:

Laser sword simply combine a flash light and some gems and you have a laser sword any Jedi would be proud allowing you not only to make all the light saber noises you want to but, also the ability to cut Zombies into pieces. Its great.

A Flaming Helmet. Want to return the Undead to just plain dead again simply grab some motor oil and a Dragons head (not a real dragon, that would be fun) and watch as the zombies go up in flames.

My personal favorite the: Freedom Bear simply take one robot bear add one light machine gun and their you have a movable turret of zombie destruction fantastic for getting out of any tight situation. These are only some of my favorites there are simply hundreds more to try and loads of fun to had. I just wish the environments were a bit more inspired, you see some parts feel like they are stripped straight out the last gaming generation, there are lots of muddy browns around, with car and buildings very boxy with uninspired and less than impressive design. It must be said that if the levels are uninspired and a bit boring the zombies themselves are simply staggering the first time you see the true majesty of your problem as you climb on top of a high ledge to get a better look, I dare you not to be staggered by the sheer amount of Zombies on screen at one time, all looking to devour you and your friends. Its simply incredible to see and my mouth dropped open at the amount of the Undead on screen at one time. I haven’t seen anything like it, that wasn’t in a movie. Its a beautiful but deadly sight to be hold.

There you go Dead Rising 3, if your up for a bit of mindless fun and can forgive a lackluster story and some forgettable villains you will enjoy it.

Almost forgot if you go on a rampage, your clothes, face and hair will become covered in blood. Its quite the sight especially fitting for this time of the year but is a bit gruesome. Don’t worry though as soon as you stop the combo the blood quickly drains away 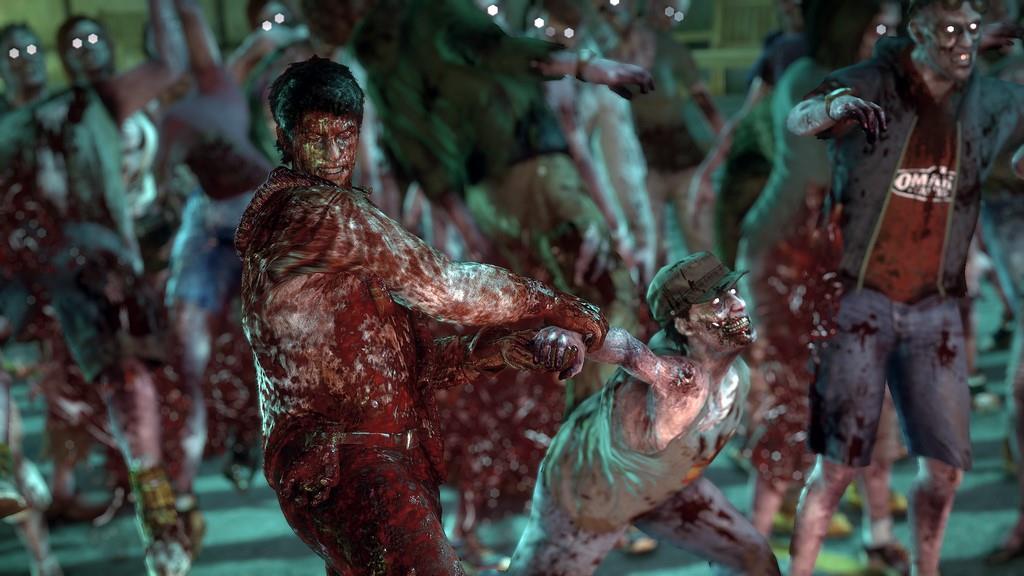